By Flickr - January 15, 2010
Haitian government estimates that the 7 SR earthquake death could reach 100 thousand or more. While the living victims suffer from hunger, beg for food on the street.
At least more than 40 thousand bodies have been buried by the Government of Haiti. Estimated that 100 thousand victims killed in this week who has not found under collapsed buildings, according to a senior Haitian official said as quoted by Reuters on Saturday (16/1/2009).

While the living feel hungry beg for food and drink in the streets. This happens because of the international aid, including food, can not divided because of damage to infrastructure, including airports and ports.

The lack of food, water, law enforcement and medical aid has caused frustration and desperation among the country's residents who are fighting to survive in the aftermath of the disaster. 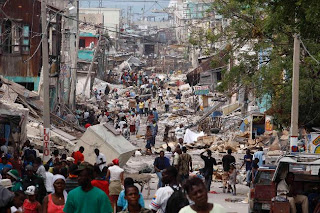 Survivors spent a second night in hell on Haiti's streets amid chaotic scenes in the capital Port-au-Prince following the earthquake that could claim as many lives as the 2004 Boxing Day tsunami.

For you that want to make a donation to help our friends there, here are some places to start:

Popular posts from this blog

By Flickr - October 28, 2015
If your XAMPP comes with PHP 5.5+ by default, opcache already included in the bundle, you will just need to enable it. To enable the extension: Open php.ini (by default it should be located here: C:\xampp\php\php.ini). Add this line at the end of the file: zend_extension = "C:\xampp\php\ext\php_opcache.dll" You will need to adjust the path if you installed XAMPP in non default location. Restart Apache server.
Read more

Hiren can not load the CD ROM Driver

Hiren Boot CD is a superb all in one tools, that helps from regular user to the IT tech guys alot. If you boot this CD, you will find heaps of tools such as: mini windows XP, recovery, backup, partition, and other tools. But the problem is, if your optical drive is using SATA connection, sometimes Hiren's bootCD will required drive emulation as it only support ATA optical drive. The result: it won't be able to loads it's driver. So one way to solve the computer with SATA optical drive is by using Hiren in USB instead. In this post, I'll show you step by step on how I did it (credit goes to hiren.info for the information). Connect a USB Drive (256Mb or more). Right click the USB drive in Windows Explorer, and choose format (this step will destroy all the data inside the USB stick, so make sure you already have backup the data you need). You can tick quick format if you are sure the USB stick is still in a good condition, or just untick it if you afraid you have badsecto
Read more

Also known as the ELAN Smart-id Fingerprint. Steps to resolve: Download the driver  (Tested on Windows 10) Extract the Zip file Go to device management, find ELAN Fingerprint, right-click and select update driver Locate the driver inside the extracted files Let me know in the comment below if you still have any issue(s)
Read more